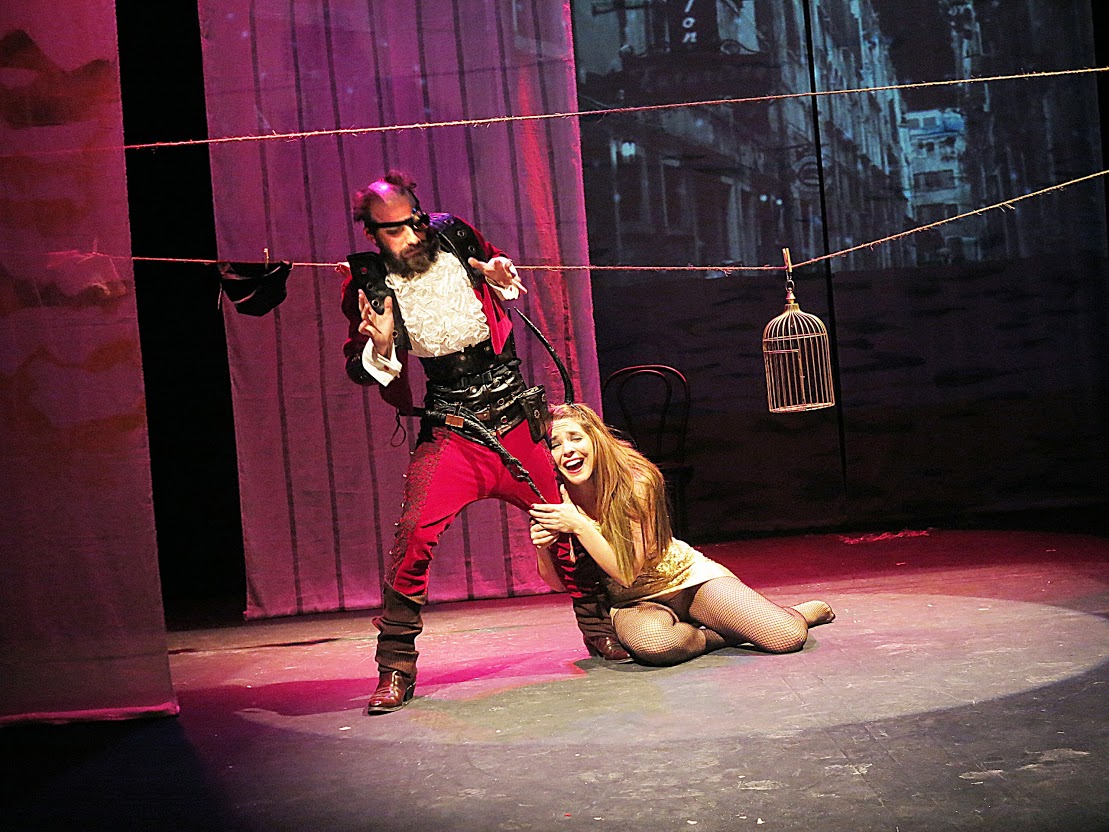 REVIEW: “The Winter of April”

Written by Ricardo Sarmiento Gaffurri and directed by Ramiro Antonio Sandoval, “The Winter of April” was inspired by news articles about prostitutes, escorts, exotic dancers, and sex slaves who were abused, tortured, and, ultimately, slain by maniacal pimps and profiteers. Tabula RaSa NYC Theater and Performance Lab described this “police thriller” as a “puzzle of how the lives of the deep sea diver, the dead female, and the exotic dancer are entwined. The characters find themselves in the dark labyrinth of human sex trafficking, . . .  A criminal enterprise behind the murders is traced to high government levels, exposing the hypocrisy of the system.”

The torn-from-the-headlines narrative was conceived by Artistic Director Ramiro Antonio Sandoval and the Tabula RaSa collective and set to dialogue through daily interaction with Ricardo Sarmiento Gaffurri, a Colombian-Italian playwright working in Colombia. During the performance, hoists go up or down, remote-controlled toy cars whiz across the set, and a variety of animations and audio-visuals turn a bare stage with two ceiling-high partitions and an occasional piece of furniture into a deserted beachside burial ground, a seedy night club, a morgue, a snowbound highway, or a verdant backyard. The cast of ten maneuvers through a richly imagined landscape, thanks to the programming and projections by Roy Chang, graphic design by Gio Quinche, the architecture of Tyrene Calvesbert, animation by Miguel Rueda, sculpted figurines, multi-media, and the effective lighting design of Sarah Harris.

Impressive creativity has gone into “The Winter of April,” thanks to the wizardry behind the scenes. The murky text and the sluggish direction, however, often disappoint.

Columbian native Clara Lopera-Sánchez plays Evelyn, a comfortably married suburban Mom, who does speechwriting for a handsome senator (Jorge Luis Berrios), and who is contacted by April (Maria Garcia), the daughter she gave up for adoption 19 years ago. Reluctantly, Evelyn agrees to travel to a foreign hotel to see April, who is, alas, killed before she can meet her birth mother. When she’s tricked into going to the morgue to identify April’s corpse, Evelyn is annoyed and wants nothing to do with this.

This lack of sympathy made an impact: I was bored by Evelyn and felt less interested in April’s plight. Tedium also set in whenever Evelyn is reading the senator’s speeches aloud, droning on robotically. These oral essays, about English mathematician Ada Lovelace and other fascinating female geniuses, are undercut by the actress’s flat monotone, a questionable choice on the director’s part. Eventually, after Evelyn discovers more about April and other abused women, she is ready to become an advocate. Though this is perhaps the writer’s attempt to show she’s changed, the emotional punch comes too late.

Moreover, the text makes no connection between the senator and the sex trade. Therefore, when he meets his end, it’s more puzzling than cathartic.

Another disconnect is Evelyn’s throw-away line that her husband supports her and there’s no need to be a hired pen for the senator — — one more head scratching moment after she enthusiastically takes his call, in a rare show of her engagement with the dialogue.  Curiously, there is such little interaction between Evelyn and the senator (or the senator with anyone else) that he remains a cipher. Perhaps he exists only to make the play longer.

Then there’s the odd choice of the costume Yosiany Simbaqueba designed for Kyle (John Neiderer III). Though he’s supposed to be a police official, his outlandish get-up — — with an elaborately ruffled white shirt straight out of Jack Sparrow’s steamer trunk — — undermines the authority he’s supposed to have and distracts us from the horrors of the victimized women the production puts in the spotlight.

Tabula RaSa, capable of marshaling a lot of multi-media talent, has picked a topic that deserves attention. Unfortunately, the press release was more riveting than the play.