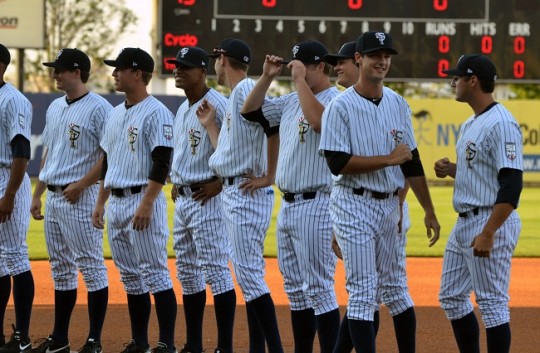 Staten Island Yankees vs. Lowell Spinners
Saturday, 8/19/2017
7 P.M.
Celebrate Italian Heritage with The Order Sons of Italy, Father Capodanno Lodge,#212, The Garibaldi-Meucci Museum (GMM), and Italian-American Award Winning Author: Marianna Randazzo.
Plus many other surprises!
Did you know that Staten Island has a higher percentage of Italian Americans than any other county in the United States?
About 35.7% of Staten Island’s residents have Italian origin. Well over 75% of the South Shore reports Italian Ancestry.      (Census 2009 American Community Survey)
The Garibaldi-Meucci Museum, located in Rosebank was the home of Antonio Meucci, the true inventor of the telephone and his houseguest, Italian Patriot, Giuseppe Garibaldi, unifier of Italy.
In 2002, on the initiative of U.S. Representative Vito Fossella (R-NY),  the U.S. House of Representatives passed United States Res. 269 on Antonio Meucci stating “that the life and achievements of Antonio Meucci should be recognized, and his work in the invention of the telephone should be acknowledged.”
The Order Sons of Italy Fr. Capodanno Lodge #212 is part of a national organization of men and women who represent the estimated 26 million Americans of Italian heritage, dedicated to promoting our culture, our traditions, our language, the legacy of our ancestors, and our contributions to the U.S. and the world.  Lodge #212 is dedicated to Staten Island’s own Fr. Vincent Capodanno, a Roman Catholic Preist killed in action in 1967 while serving as a US Navy Chaplain assigned to the Marine Corps infantry during the Vietnam War.  In 2002, Fr. Capodanno’s Cause for Canonization was officially opened. He is now referred to as a Servant of God.
Visit representatives of the Fr. Capodanno Lodge, Order of the Sons of Italy and the GMM. Learn about what it means to be a member of the largest and oldest Italian American fraternal organization in the United States, OSIA. Learn about our very own Fr. Capodanno Lodge, honoring Fr. Vincent Capodanno, located in Staten Island.  Learn about the Garibaldi-Meucci Museum, the oldest Italian American Historical Landmark in the United States located in Rosebank. 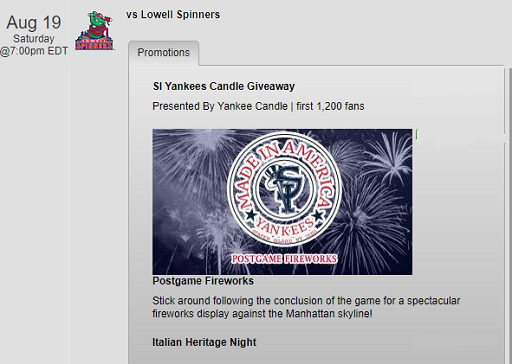 Marianna Randazzo is a retired NYC educator, writer, and author. She has dedicated her time and efforts to promoting Italian history and culture through her involvement in the Garibaldi-Meucci Museum, her award winning books and writing. Meet and greet Marianna as she signs her books at Richmond County Bank Ballpark!
Free SI Yankees Candle Giveaway to the First 1,200 fans.
Post-game Fireworks!
Stick around following the conclusion of the game for a spectacular fireworks display against the Manhattan skyline!
To get tickets:
http://www.milb.com/tickets/singlegame.jsp?sid=t586#game=507722