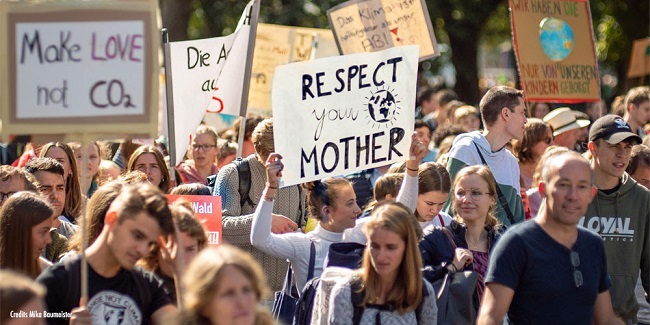 Climate Change Theatre Action 2021, is a series of readings and performances of short plays written by playwrights from around the world on the theme of climate change and the Green New Deal. A project that invites local communities to take action and to raise awareness of the climate emergency.

Italian actor and director Giovanni Morassutti presents with Art Aia -Creatives In Residence, in collaboration with the Arctic Cycle, and with the Centre for Sustainable Practice in the Arts the play When written by Canadian playwright Wren Brian. The event is organized in collaboration with the most prominent and widespread environmental Italian association Legambiente among other partners.

Giovanni E. Morassutti is an Italian actor, theatre director, writer, artist, and cultural entrepreneur. He is a graduate of the Centro Sperimentale di Cinematografia directed by Giancarlo Giannini and long time student and collaborator of John Strasberg. Since 2001 he has appeared in more than 30 films including independent films, prime-time tv and international films. As a stage actor and director, he has worked in plays presented in theaters like the Cherry Lane, the Gene Frankel Theatre, and La MaMa among others.

As said by Morassutti: “ I am organizing an event on the banks of the Tagliamento River, symbolizing its authenticity as a morphologically intact river. I believe that theater, like all the arts, has the task of raising public awareness of such urgent issues.”

Art Aia – Creatives / In / Residence is an international art residency immersed in the Friulian countryside that combines art, environmental sustainability, and eco-therapy practices and proposes, with the Art Aia – Studios, new possibilities for collaboration in different fields. The cultural center is located in an ancient agricultural center and offers higher education courses in some disciplines among the liberal arts such as performing arts, visual arts, and ecology. Aia- Creatives / in / Residence is also partnering with the Transcultural Exchange and with the Uronto artist community in Bangladesh by organizing artist residencies and online exhibitions and Morassutti has also founded a subsidiary space in Berlin, Art Aia – La Dolce Berlin, a project space in the Turkish area of Wedding, committed to improving the cultural offer of the neighborhood. As a replica of the Friulian headquarters, the subsidiary space hosts artists in residence who can show their works to a Berlin audience in an intimate and familiar atmosphere establishing a dialogue with the local community. Art Aia is also a film production company that produces documentaries and narratives dealing with topics, including nature, creativity, art, and gender equality. Actor Giovanni Morassutti, as the founder of the project, has been working for a few years now to create a kind of connection between people that lead to collective civic action, political expression, community dialogue, and shared cultural experiences. At the moment, he is consolidating his collaborations with several international partners, the Friuli-Venezia Giulia Region, and other local entities rooted in the local community. Morassutti’s goal is also to enhance cultural tourism in the region through artistic proposals, such as artist in residence programs and training activities addressed to an international audience.