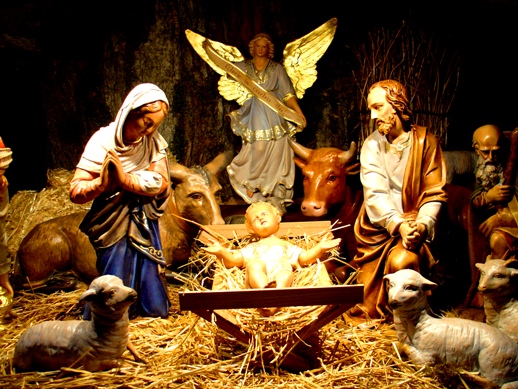 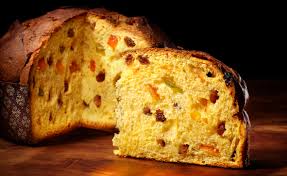 It’s the Christmas season in America and the craziness has begun.  Stores are decorated with the customary red and green.  Artificial and real evergreen trees of every size are embellished with ornaments, ribbons and unique trinkets and stand in stores, malls, in front of municipal buildings, churches and on front lawns.  Santa Claus is sitting on his throne in the mall so children can have their picture taken with good St. Nick.  Newspapers are filled with ads beckoning shoppers to take advantage of the deep discounts offered for clothing, electronics, toys, jewelry and even appliances.

In Italy things are a bit quieter, though Babbo Natale, their version of Santa Claus, continues to insinuate himself into the culture with Christmas trees everywhere.  In Italy the month of December is punctuated by Saint Days, panettone, and Christmas cookies indigenous to the different areas of Italy.

Holiday food preparations begin in Advent with 12 varieties of cookies being baked to symbolize the 12 Days of Christmas.  The origin of Advent can be traced to the 6th century, but did not initiate the Church’s liturgical year until the 12th century.   It is a time for modest treats for children of all ages.  The advent calendar window may contain a small piece of chocolate, a sliver of tangerine, some pomegranate seeds, a date, a fig.

In Tuscany it is customary for some families to make up Della Robbia wreath to hang on their door or in their home.  The wreath dates back to the 14th century Florentine sculptor, Luca Della Robbia.  This circlet of fragrant evergreens is adorned with seasonal fruits, berries and even small vegetables.

The celebrating of Saint Days begins on December 6th with St. Nicholas  – candy-making day.   Originating from Southern Turkey, the least known St. Nicholas is a cleric who lived, preached and did good works in Le Marche between 1245 and 1305.  The more famous St. Nick, the one we indentify with Santa Claus, is an Augustinian bishop from the 4th century.   His remains can be found in a Norman basilica in Bari which bears his name.

The connection between gift-giving and St. Nick has a very dark origin.  It is believed that he saved three sisters from being sold into prostitution by their indigent father who could not maintain them or  provide a dowry for marriage.   St. Nick stepped in and gave their father three purses of gold, a dowry for each, thus rescuing them from a life a sin.

The next saint who is venerated on December 13th is St Lucy (Santa Lucia.) St. Lucy’s Day is celebrated with parties at which cardamom spice is used liberally in the cooking, baking and even espresso coffee, which is sprinkled with ground cardamom seeds.  In Calabria, which traded with the east for centuries and where cardamom came from, this custom of using gingery spices is still done.

St. Lucy, killed in 304 AD, is the patron Saint of Syracuse, so the Sicilians are devoted to celebrating her day.  December 13th is the day Lucy was blinded and became a virgin and martyr for the Church.   To commemorate her blindness, bonfires and torch processions are lit for her, giving her the light in her eyes that was taken from her.

Of course, throughout Italy and especially in Naples, Christmas would not be Christmas without the Presepio or the spectacular manger scene.  Churches all over compete to make the most interesting and complete manger scene.  Besides the customary Jesus, Mary, Joseph, shepherds, kings and angels, characters added based on the region’s history and local buildings are added.

The last Saint Day celebrated is St. Stephen’s day on December 26th.  St. Stephen was stoned to death in 36AD in Jerusalem after having been tried before a Jewish Judicial Tribunal for blasphemy.  Because he is the patron saint of horses, it is customary to bake bread in the shape of horseshoes.  Chestnuts are roasted on St. Stephen’s Day and chestnut desserts and mulled wine are served.  This simple menu makes sense since most family have feasted on sumptuous meals on Christmas Eve and Christmas Day, surrounded by family.

One Christmas traditions that is waning because of the American Santa Claus or Babbo Natale is the tradition of La Befana.

La Befana is an old woman or witch on a broomstick who delivers gifts to children on January 6th.  She fills the good children’s socks with candy and the bad children’s socks with coal or a stick.  La Befana is believed to be descended from the ancient goddess of the Sabines named Streina, who gave figs, dates and honey to children for the New Year. 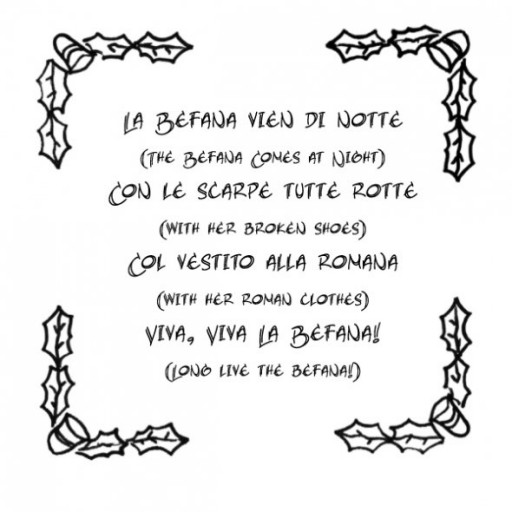 One of the three places in Italy which are noted for having preserved the custom of La Befana is Rome’s Piazza Navona, which holds a festival in her honor.  Toys, candles and sugar charcoal are sold among the many stands of food and crafts.   The Province of Pesaro and Urbino also keep the tradition of La Befana alive.  Children are encouraged to write La Befana letters telling of their desired wishes.  A glass of wine and a plate of small tidbits are left for her.  Of course, just like Santa Claus’ cookies and milk are gone in the morning, so too are the wine and treats in Italy.  One thing she does that Santa does not do is to use her broom to sweep and make the house clean.

Although Italy has incorporated many American customs for Christmas, it is done on a much smaller scale.  No one is killing another to get that large screen TV at a rock bottom price.  No one is lined up at five in the morning to get that best buy.  Children are given gifts but no buried under them.  I have a neighbor who sets aside one room in December for all the Christmas gifts bought for her immediate and extended family.  When you open the door, the room is filled from floor to ceiling with gifts.   I don’t think Italy has bought into the conspicuous consumption that is standard in American now.  Perhaps, we should take a lesson.