The journey of the Aleramici to Sicily, the meeting of the Normans and the Swabians and the creation of the Euro-Mediterranean Federation on Ancient Medieval Migrations.

Filming for the documentary film “Le vie Aleramiche and Normanno Sveve”, which tells the story of the Norman and Swabian dynasties, is now almost completed. Fabrizio Di Salvo, its creator and director, chaired an online meeting with the key European partners in this ambitious cultural project.

The Aleramici brought their culture to Sicily, where it was absorbed by the local population.  Even today the Gallo-Italic idiom persists in many Sicilian areas.

Accompanied by the late Roberto Maestri, Di Salvo, (Sicilian by origin and Piedmontese by adoption) visited Sicily on various occasions to participate in study seminars organized by the Piazza Armerina UNESCO club (coordinated by Anna Maria Di Rosa Placa in collaboration with the Regions of Sicily, Piedmont, and Liguria, with contributions from Italian Universities).

It was in Piazza Armerina – the only city completely rebuilt by the Aleramici – that Di Salvo and Maestri first thought of retracing the ancient emigration of the Lombards from northern to southern Italy. This project subsequently evolved into the creation of a cultural, touristic and gastronomic network of places marked by the presence of Aleramici, Normans, and Swabians from the eleventh to the thirteenth century.

The Euro-Mediterranean Federation aims to unite associations, municipalities, universities, and members of the Scientific Technical Committee into a single body which will build upon the work accomplished by Di Salvo over years of studies, meetings, debates and travels in the various countries today involved in the project.

Di Salvo chaired the meeting in several languages, reflecting the international dimension of the event and the zone of scientific research, which stretches to the farthest borders of Europe.

The aim of the “The Aleramici and Norman-Swabian Ways” visio-conference was to establish a framework for the different stakeholders to collaborate on future cultural, economic, and tourist projects. It took place in the presence of the mayors Enzo Daniele of Sezzadio, (birthplace of Aleramo), Guy Fossard of Hauteville La-Guichard (Hauteville in Normandy home of the Altavilla family) and Nino Cammarata (Piazza Armerina, a city founded by the Aleramici). 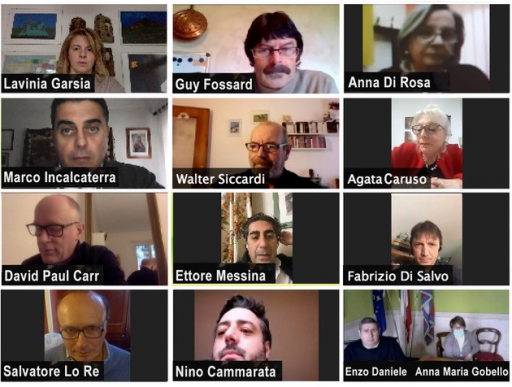 The actor Walter Siccardi, who participated in the filming of the documentary “Le Vie Aleramiche”, also took part, as well as Annamaria Gobello, head of FAI in Sezzadio, and the English filmmaker David Paul Carr.

Also involved in the project were the mayor of Troina, Fabio Venezia (Troina was the first Norman capital in Sicily following the conquest of the Grand Count Ruggero d’Altavilla, twinned with Hauteville since the 90s and also with Coutances) and Martin Mundorff (Head of the Historical Archive of Goppingen, city of Baden-Wurttemberg, a region once known as Swabia and homeland of the Hohenstaufen dynasty “Swabians”).

In addition to the mayor of Piazza Armerina, Nino Cammarata, there were also fellow citizens Ettore Messina, councilor for tourism – who last summer chose to present the traditional Norman Palio also with a short trailer on Ruggero d’Altavilla – Marco Incalcaterra, president of the Council, Lavinia Garsia, who in the project manages and updates – together with Filadelfio Crivillaro of  San Fratello – the Facebook page “Aleramici in Sicilia” (m.facebook.com), Agata Caruso, president of the AIParC Territorial Center partner of the project and Salvatore Lo Re, historian and President of  Society of Homeland History of Sicily.

Among the objectives of the Euro-Mediterranean Federation, will be the study of the migrations of peoples that occurred in ancient and medieval times. This research will cover not only Europe but also Russia, the countries bordering the Mediterranean Sea, the Middle East, Anatolia, and the Caucasus. Scientific studies will be supported by a high-level academic committee, including the well-known Henri Bresc, Luca Sineo of the University of Palermo, Davide Pettener of the University of Bologna and Joanna Drell of the University of Richmond, United States .

These studies will serve to demonstrate that all peoples of the earth are connected to each other and form a single race, the human one.