Lovers of verse will fondly recall the Chilean Nobelist Pablo Neruda as the poet to whom the postman Massimo Troisi delivered letters in Michael Radford’s enthralling “Il Postino,” a romantic comedy released in 1994 and nominated for four Academy Awards. Footage for this critically acclaimed motion picture was shot in Italy in the Aeolian Islands, Messina, Sicily, Naples, and elsewhere.

It’s about time a luminary of this stature was sunned with wide-screen attention on his own. Screenwriter Guillermo Calderón, who did a bio-pic on famed Chilean singer and folklorist Violeta Parra five years ago, plays cat and mouse games with historical fiction as the exiled senator and enemy of the junta [Luis Gnecco] is stalked by a dapper detective [Gael García Bernal] who is facing his own existential crisis. 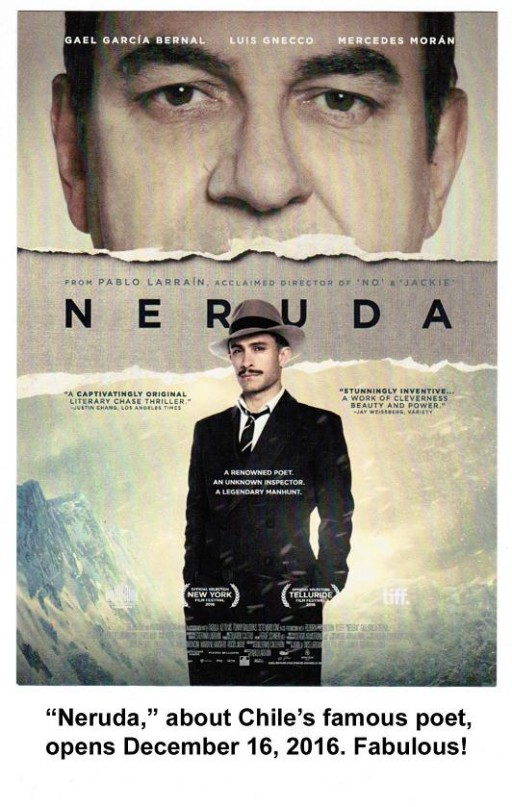 It’s a rare Chilean film that does not mention either the Allende or Pinochet regimes. Both dictators do drift through the dialogue, however, the action is not set during their heyday. Instead, it’s tightly focused on an 18-month interval between 1948—1949 when Pablo Neruda became a fugitive in his homeland for joining the Communist Party and was forced to hide, and then escape.

The movie cheekily opens in a sumptuous, chandeliered lavatory where the male assemblage take a turn at the urinals as Neruda delivers the damning speech against the president, Gonzalez Videla, that will make him a wanted man.

Since too many spoilers would be revealed by discussing the narrative, which wanders from boudoirs to brothels, from city streets to cellar hideaways, from masquerade balls to a mountain pass near Maihue Lake into Argentina, prepare to enjoy the beautifully recited poems, the artifice, the period costumes and vehicles, and the cinematography by Sergio Armstrong — a magic carpet ride through post-war Chile, Argentina, and Paris, France. 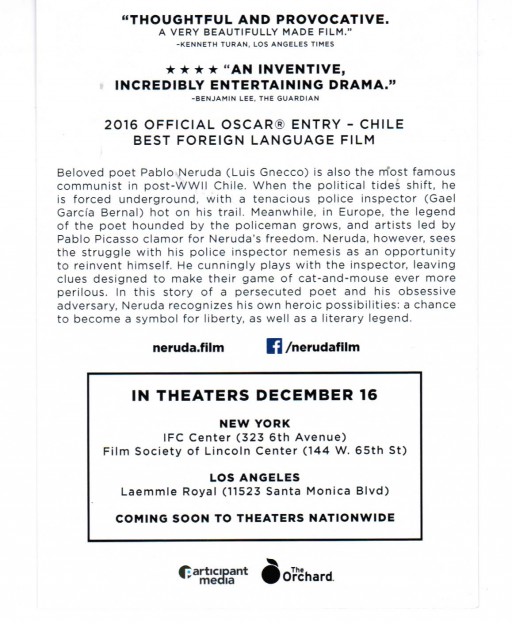