Outside the Strongbox: a discovery of my roots. 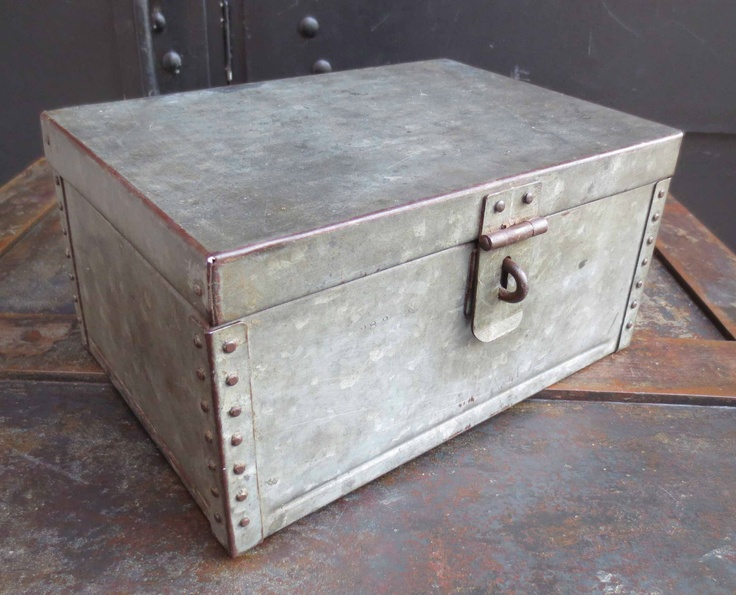 Going through my mother’s things after she died was an often painful process.  Evidence of my immediate family’s history such as photographs, baptismal certificates, passports, honor roll records, college awards could be so nostalgic that the tears would start rolling down my cheeks before I had gotten past the first line.
At the bottom of the metal box where these treasures were stored was an envelope discolored with age that I had never seen before.   I knew it had to predate my birth, perhaps even my mother’s birth.   I tried to gingerly pull the sheets out but my fingers managed to crumble the corner into bits.  Not wishing to do more damage, I sacrificed the envelope and cut it opened with a pair of scissors.
Just like all Americans, my family came from another country.  They came from Italy.  Most people associate the port of entry for Italian immigrants to be Manhattan’s Ellis Island.  Few people realize that New Orleans was another hub for immigrants of all nationalities, especially the Italians. 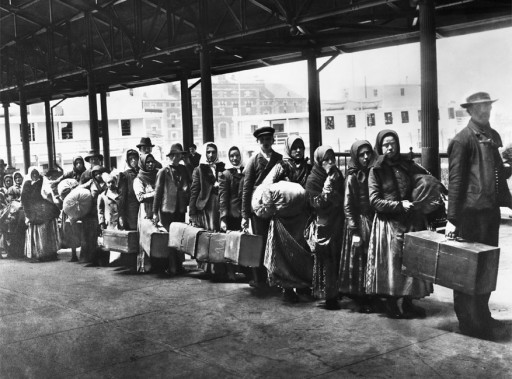 In the 19th and 20th centuries, immigration was driven by war, poverty, social and economic oppression.   America was not only the land of opportunity; people from the Old World were attracted to the democratic system of government with its freedom of religion and freedom of speech.
One reason for Italian immigration that is often not acknowledged is disease.   The poor of Northern Italy, especially Lombardy and the Veneto, were plagued by pellagra, which is a deficiency in niacin. This problem was caused by a diet consisting mainly of polenta (corn meal).  Inhabitants of this region with scare resources to buy a variety of food needed for good nutrition (meat, fruits, vegetables and grains) developed pellagra which caused blindness, severe dermatitis, neurological impairments and even lunacy.

The bane of existence in Southern Italy was malaria, a mosquito born disease which led to high swinging fevers, complications to the brain and liver, coma and death.  Both diseases are curable if caught early enough.  However, medicine in the 19th century was not the medicine of today.  So many poor Italians were forced to leave the country they loved for a new land in an effort to find employment.  There, hard work would translate into a higher standard of living and provide a healthy life for themselves and their children.

As I mentioned, when we think of the immigration of Italians and others, we automatically think of Ellis Island. However the facility was not built until 1892.  Prior waves of Italian immigrants and others landed on the Battery where a New York State Immigration station was located from 1855 to 1892.
Everyone knows someone who came through the port of New York and most people have heard that when the immigrants arrived, Italians included, they were examined for physical and mental illness, as well as communicable diseases.  If the ailment was easily curable they were sent to the hospital in the complex. Otherwise they were deported.
Besides providing their name, country and town of origin, parents’ names, list of any children and occupation, the Immigration and Naturalization officers had to know the marital status of the individual.

Unaccompanied women could not disembark unless there was a father or husband with proof in hand to claim them.  If they were unmarried, but had a fiancé ready and willing to marry them on the spot, they could disembark.  Brides could be married in a religious ceremony or have a civil ceremony.
The waiting fiancé would make arrangements in advance with The St. Raphael Society for Italian Immigrants and a priest would be waiting with the groom to claim the bride.  Witnesses also had to be produced.  My great-grandparents marriage licenses were in that strong box as were two others from my grandfather’s first wives.  These documents came from New Orleans.  So it appears that the menfolk of my family originally came through the south of the United States.
Below is an example of a marriage certificate completed by the St. Raphael Society for Italian Immigrant when grandpa married for the second time.   Paolo Ferretti of Brebbia (Lombard town near Milan) and his bride Rosa Porrini also originally from Brebbia were both married on November 1, 1914.  This certificate enabled the happy couple to go on their way. 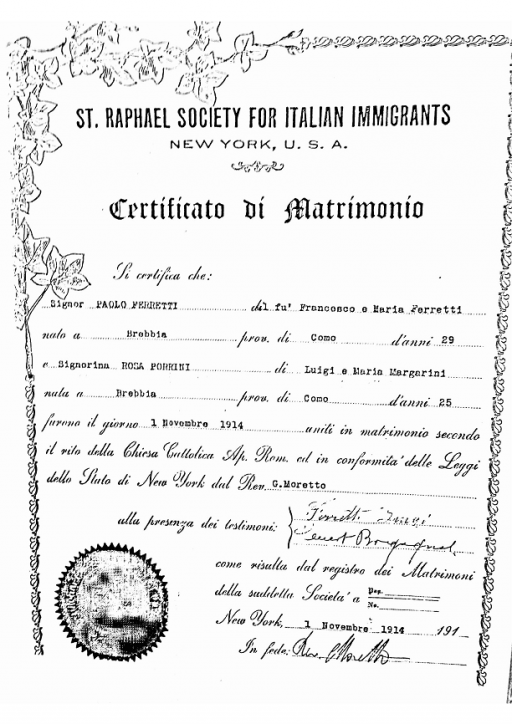 Nicola Eschino and Francheschina Mastropaolo from the province of Molise, were married on Ellis Island on March 8, 1903 (my grandmother was an Eschino.)  On this document you will see that the great-grandfather Eschino resided in Rotterdam, NY, and the bride’s residence was listed as Ellis Island.  Grandpa Eschino married his first wife in New Orleans at the tender age of fifteen.

In the 19th century before Ellis Island, the Port of New Orleans was the major port of entry for immigrants, particularly Italian immigrants. This hub was created because of the opportunity for employment.  Massive amounts of Caribbean goods as well as American goods (citrus, rice, sugar, cotton) were exported to Europe.
Italians from Sicily were the first to come to the Port of New Orleans.  In 1751 Jesuit missionaries brought sugar to Louisana.  Of all the people in Europe, it was the Sicilians who had the most experience growing cane and citrus.  They had been working the sugar cane fields of Sicily for 350 years.  The rich land that existed centuries ago was now infertile.  Consequently, these farm workers knew how to get the land to produce.   Using their Italian techniques on the rich American soil produced sugar cane and citrus harvests that could only be dreamed of in Italy.  The Sicilian worker was a priced employee.  As the decades passed  L’Italo-Americano Labor Bureau was opened on Poydras Street in New Orleans.

Another reason Italians, not just Sicilians, came to America through the port of New Orleans was the cost.  It was the least expensive way to come to America.
With the advent of Clipper ships, these swift and enormous ships were filled with agricultural products bound for Europe.  In England, Naples and other ports rather than sending the boats back to New Orleans empty, they sold space for a nominal fee.  There were no beds, no food, no plumbing.  If the passenger survived the trip, he could come to America for next to nothing.
Throughout the years, my mother never mentioned her immigration experience with us.  The only thing I knew was she arrived in one of the worst snow storms to hit New York of the early twentieth century and that her father had been living in America since he was a boy.   In order to piece together the family’s history I would have to look outside the strong box.
I decided to take a trip to New Orleans, taking with me copies the certificates of the grandfathers’ first marriages, which were executed in Louisiana.

The first place I started was the Central Grocery Store on Decatur Street.  This market was mentioned to me so often.  “You have to eat a Muffleta sandwich,” they said.  “The store has been there forever.”  So to the Central Grocery I went and yes, I ate  one of their Muffaleta sandwiches.  If you were raised in the New York tri-state area, especially where there is a large concentration to Italian-Americans, this market held no surprises.
Perhaps for Americans from the southern and western parts of the United States visiting this establishment would find the products in the store exotic but, believe me, there was nothing there that I had not seen or eaten my entire life.  The Muffaleta was like our “Blimpie” sandwiches with lots of Italian cold cuts between the bread.

I did get to talk to the proprietor and showed him the marriage certificates, but none of the names were recognizable.  Nor did the phone book carry those names.  The Italian-American Museum also had no leads for  the surnames Sciancalepore and De Judicibus.
I decided that a more in depth exploration would have to be undertaken, perhaps when I retire and have more time this will be my priority.  Until then, the documents all went back into the strong box.