Your Italian Roots May Go Places You’ve Never Dreamed Of

If asked, the average Italian American’s knowledge of their roots is sketchy at best.  “I know my relatives came from Sicily.”  “We came from the north of Italy, not the south. “ “I think it was an island off of Naples called Prodgida (Procida).”

If one were to inquire as to when Italians first started settling in American, the details get even more imprecise or should I just say incorrect.  “They first came over during the Industrial Revolution.  “At the turn of the century (meaning 1900.)” After the first World War.”  “After the second World War.” “ Around the same time as the Irish.”  Most of them settled in either Chicago, New York City and New Jersey.  No one ever says  Alabama or Michigan or South Carolina. 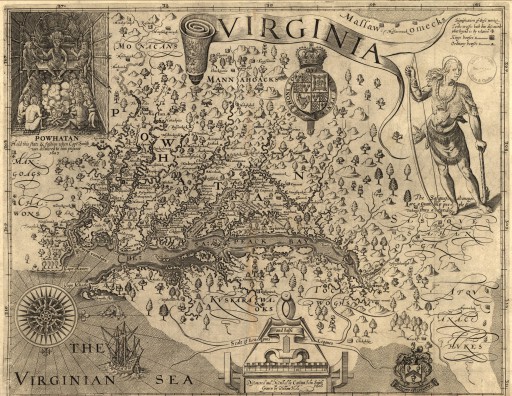 If students of Italian American history were to begin their studies in the 1800s , they would miss the mark by a couple of centuries and miss out on fascinating historical details.   Few Italian-American have heard of Lt. and Mrs. Albiano Lupo.  They landed in Virginia in 1619, and purchased 400 acres of land to farm.  I wonder if they would qualify for the DAR.  Probably not.

The first mass migration of Italians (300 people) were from Piedmont (Piemonte) and they settled in New York in 1657. Okay, that’s in the north east, but did you know the entire center of the United States was controlled by an Italian from around Naples in the1600s?

Enrico Tonti, often referred to as Henri de Tonty, together with La Salle brazed the trails of the Midwest (Alfonso Tonti, one of the founders of what is now Detroit, was his younger brother).  In 1682, La Salle then left Tonti with the mission to build a ship to navigate the Great Lakes and control the entire Mississippi Valley.  LaSalle gave him a land grant about thirty-five miles from the mouth of the Arkansas River.  Tonti built forts and trading posts up and down the Mississippi River and in Arkansas his permanent settlement served as a midpoint station for travelers and traders between the Illinois country and the Gulf of Mexico.  Although Tonti died of yellow fever in Alabama in 1704, a monument was not erected to his memory until 1904.  Quite a gap of time there!

Yes, Italians have been in the United States a long time and Arkansas is the last place people connect with Italians even though there are a number of towns named for Enrico Tonti- Tontitown, Tontiville just to name two.

Arkansas has seen its share of Italian migration, beginning in the mid-1800s.  At that time an arrangement was made with Prince Ruspoli, mayor or Rome, for Italians to come farm 10,000 acres of a Chicot County plantation on the Mississippi called Sunnyside Plantation. The immigrants and their families were given twelve and a half acres of land with housing and were indentured farm workers.  The land, houses and passages to America were to be repaid over a twenty-one year period. Five hundred Italian families arrived initially and one hundred arrived each year after that.

The Italians found that the area was plagued by floods and malaria and the houses barely livable, many lacking pumps for water.   Many were not even acquainted with farming practices and duped into coming.  Others were given plots in swamplands.  Deaths from the unsanitary conditions and disease claimed an inordinate number of lives.  Those who remained healthy found that the crops were flooded out often and they had  worked an entire year for nothing.  Making matters worse was the fact that everything the farmers needed or wanted had to be bought at the company store at an exorbitant price.  Farm workers were bound to the plantation under the penalty of imprisonment nor could they purchase what they need elsewhere.   The farm workers were fined for the slightest infraction, adding to their debt.  When they tried to complain, they were fined again.  It was not long before that the colony of Italians was desperate, realizing they would never be free. 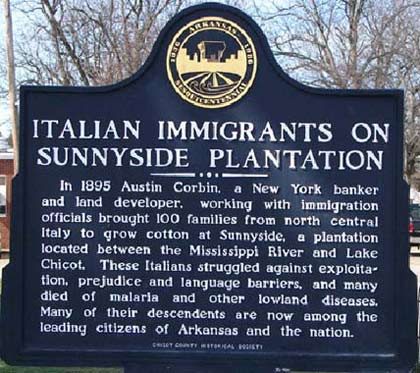 Thanks to a Jesuit priest their complaints were heard but not resolved until 1907 when the United States government charged the company with breaking the debt and peonage laws.  The immigrants dispersed to other areas along the Mississippi.

An excellent novel depicting life on the Sunnyside Plantation was written by Mary Bucci Bush.  This story details the life of Serafin and Amalia Pascala and their family on the Arkansas farm.  It tells of the hardships they and their countrymen dealt with on a daily basis, having to work long hours and barely subsisting on field greens because of lack of money to purchase food, clothing and the barest necessities.  It also demonstrates the role African Americans played, helping the newcomers adjust to the hard realities they faced, realities that the black farmers lived with for a couple of centuries. 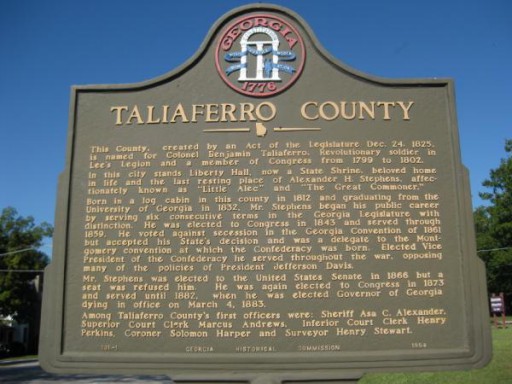 Our Italian roots can take us to Detroit, Michigan founded by Alphonse Tonti.   It may take us to South Carolina to Elias Prileaus (Priuli), the founder of the Hugenot Church in South Carolina, or maybe to  the sixteen glass workers who settled in Jamestown, Virginia in 1622.  How about Georgia where Captain Benjamin Taliaferro commanded a rifle company during the Revolutionary War?  Many Taliaferros converted their names to Tolliver, and if your name is Green, you may find out with a little digging that the original settler in the new world was really Verdi.  Remember Woody Woodpecker’s creator Walter Lantz?  His name was really Lanza…