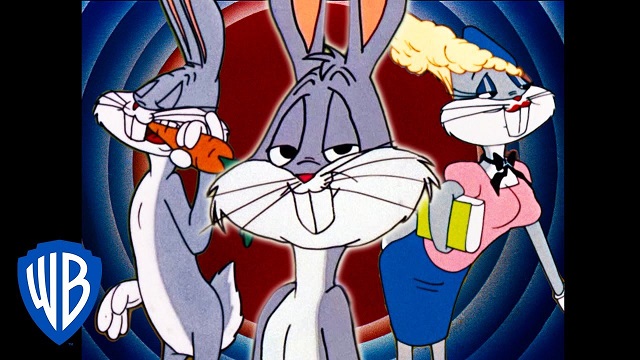 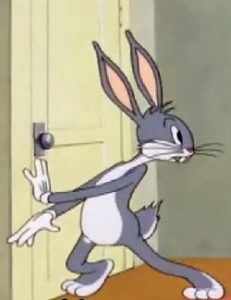 Bugs Bunny is an animated cartoon character, created by Leon Schlesinger Productions (Warner Bros. Cartoons) and voiced originally by Mel Blanc in 1930. Bugs is best known for his starring roles in the Looney Tunes and Merrie Melodies series of animated short films, produced by Warner Bros, though a similar character debuted in Hollywood in the WB cartoon “Porky’s Hare Hunt” (1938) created by a group of authors: Ben “Bugs” Hardaway, Bob Clampett, Tex Avery who gave a personality to the rabbit in 1940, Robert McKimson who created his definitive graphic aspect, with Chuck Jones and Friz Freleng. Bugs Bunny appeared in a few subsequent shorts, the definitive character of Bugs is widely credited to have made his debut in director Tex Avery’s Oscar-nominated film “A Wild Hare” (1940).
Bugs is a gray and white rabbit who is famous for his flippant, insouciant personality. He is also characterized by a Brooklyn accent, his portrayal as a trickster, and his catchphrase “Eh… What’s up, doc?” Due to Bugs’ popularity during the golden age of American animation, he became the official mascot of Warner Bros. Entertainment.

Since his debut, Bugs has appeared in various short films, feature films, compilations, TV series, music records, comics, video games, award shows, amusement park rides, and commercials. He has also appeared in more films than any other cartoon character.
In the cartoon “Porky’s Duck Hunt” (1937), Bugs Bunny is with Daffy Duck and Porky Pig.  The white rabbit had an oval head and a shapeless body. In characterization, he was loud, zany, with a goofy, guttural laugh; Blanc provided him with a hayseed voice. The rabbit comes back in “Prest-O Change-O” (1939), directed by Chuck Jones. 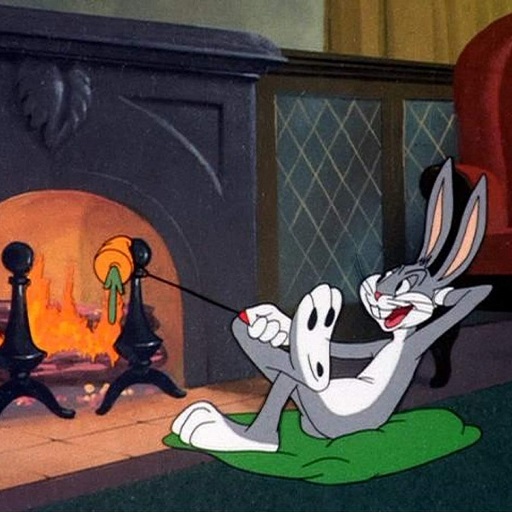 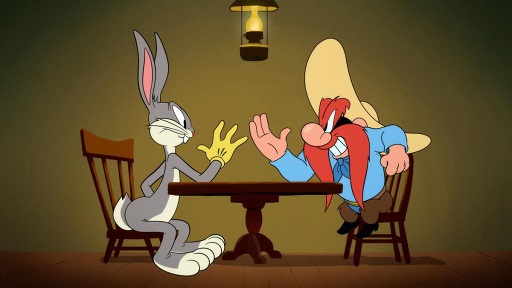 While “Porky’s Hare Hunt” was the first Warner Bros. cartoon to feature a Bugs Bunny-like rabbit, “A Wild Hare”, directed by Tex Avery and released in 1940, is widely considered to be the first official Bugs Bunny cartoon. It is the first film where both Elmer Fudd and Bugs appeared, both redesigned by Bob Givens,   “A Wild Hare” was a huge success in theaters and received an Academy Award nomination for Best Cartoon Short Subject. 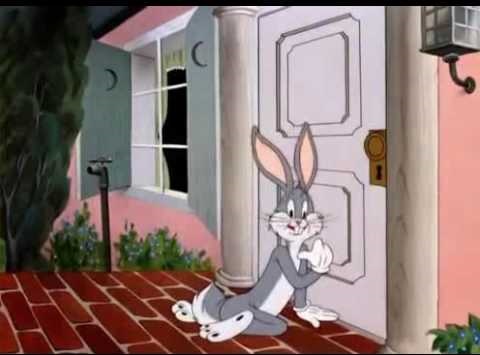 For the film, Avery asked Givens to remodel the rabbit. The result had a closer resemblance to Max Hare. He had a more elongated body and looked more poised.
“Hiawatha’s Rabbit Hunt” (1941), directed by Friz Freleng, became the second Bugs Bunny cartoon to receive an Academy Award nomination. 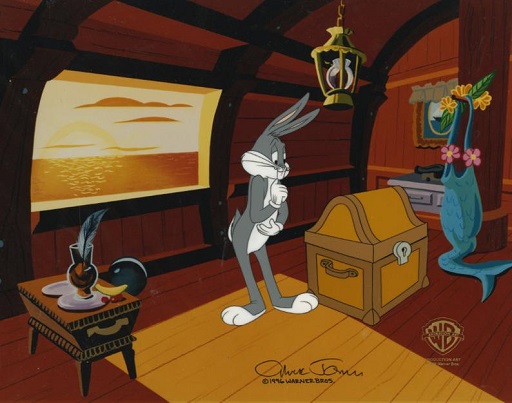 By 1942, Bugs had become the number one star of Merrie Melodies. The series was originally intended only for one-shot characters in films after several early attempts to introduce characters Foxy, Goopy, Geer, and Piggy.
Bugs also played in Avery’s final Warner Bros. cartoon, “Crazy Cruise,” Bugs’ is very popular for his free and easy attitude, and he began receiving special star billing in his cartoons by 1943. 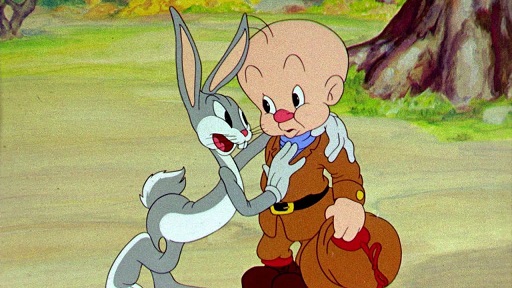 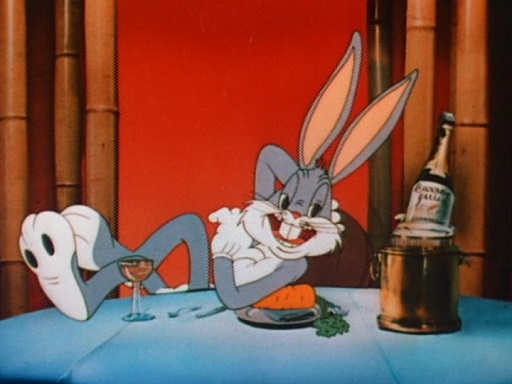 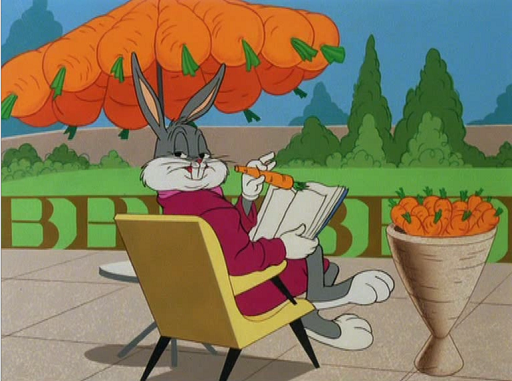 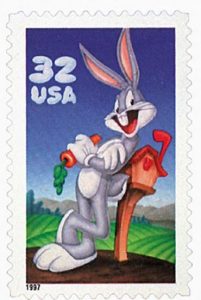 In 1997, Bugs appeared on a U.S. postage stamp. A younger version of Bugs is the main character of Baby Looney Tunes.
In 2011, Bugs Bunny and the rest of the Looney Tunes gang returned to television in the Cartoon Network sitcom, The Looney Tunes Show.
Bugs almost always wins the conflicts with other characters;  other directors, such as Friz Freleng, characterized Bugs as altruistic, making him more likable and realistic.
Bugs’ nonchalant carrot-chewing standing position, as explained by Freleng, Jones and Bob Clampett, originated in a scene from the film “It Happened One Night” (1934). The carrot-chewing scenes are generally followed by Bugs’ most well-known  “What’s up, Doc?”, which was written by director Tex Avery for his first Bugs Bunny film,  “A Wild Hare” (1940). Avery explained later that it was a common expression in his native Texas and that he did not think much of the phrase.
Mel Blanc voiced the character for almost 50 years, from Bugs’ debut in the 1940 short “A Wild Hare”, Blanc described the voice as a combination of Bronx and Brooklyn accents; for the second cartoon, “Elmer’s Pet Rabbit”,  Blanc created a completely new voice for Bugs. 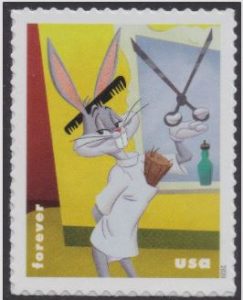 The original Bugs Bunny’s voices are actors Mel Blanc, Jeff Berman, Greg Burson, Billy West e Joe Alaskey, alternating in the role.
Bugs first appeared in comic books in 1941, in Looney Tunes and Merrie Melodies, published by Dell Comics.
The Bugs Bunny comic strip ran from 1942 to 1993, by the Newspaper Enterprise Association. In 1948, it became a daily strip. The nice rabbit Bugs Bunny starred in the TV commercials:  the Mirinda a fruit-flavored soft drink, the Sugar Crisp cereals, Ziploc storage bags to keep fresh vegetables, and for the Italian spot, Sidis supermarket.
Bugs became the second cartoon character (after Mickey) to receive a star on the Hollywood Walk of Fame, Los Angeles,  California